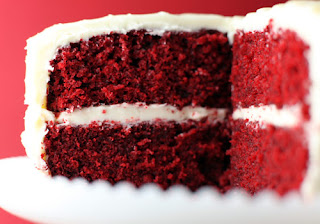 When I was growing up in Southern California, Red Velvet cake was not common. I hadn't even heard of it until the 1980s, and since every recipe I came across called for oodles of red food coloring, I just couldn't bring myself to ever bake one. (I avoid artificial anything, including coloring)

The current popularity of Red Velvet cake (and of course, cupcakes) has led me to research its origin, and try to come up with a recipe sans red food coloring. Some food historians believe that home bakers started using red food coloring to enhance the natural red hue produced by the interaction of cocoa with acid--vinegar, buttermilk, etc. Perhaps home bakers started adding red food coloring after Dutch process cocoa became widely used. (The Dutch process makes cocoa easier to dissolve by adding an alkalizing agent like potassium carbonate, decreasing the acidity in the batter and thus muting the redness.) Whatever the reason, it is likely that the original Red Velvet Cake did not include red food coloring.

Red Velvet cake is neither chocolate nor vanilla, and can contain anywhere from 1 measly teaspoon of cocoa, to a full cup full. Most recipes call for shortening (not a favorite in this house) but purists insist on oil for a moist cake, and many like butter for its rich flavor. Buttermilk or milk and vinegar are also almost always called for. Boiled or Cream cheese icing is most common.

Here is a recipe I have used that has always been well received:

1. Preheat oven to 350 degrees F (175 degrees C).
2. In a metal bowl placed atop a pot of simmering water, whisk together egg yolks, 1/2 cup granulated sugar, vanilla and buttermilk for 3-5 minutes until pale yellow.
3. Remove from heat and continue whisking for an additional 5 minutes until thick and foamy, nearly tripling in size.
4. Meanwhile, in a separate bowl, whisk together egg whites until foamy. Add in cream of tartar.
5. Continue whisking until soft peaks begin to form, then gradually add remaining 1/2 cup granulated sugar and beat until peaks are stiff and glossy.
6. In a third bowl, sift together cocoa powder, cake flour and beet powder.
7. Gently sift dry ingredients into egg yolk and egg white mixtures, folding all three components together until combined.
8. Divide cake batter into two 9" round cake pans, lined on the bottom with parchment paper. Bake for 20-25 minutes.
9. Remove from heat and invert pans over baking rake while cake cools. Gently cut cake away from edges and remove from pan. Frost and layer as desired.

***
Interesting additional information on the history and origin of Red Velvet Cake: http://www.suite101.com/content/origins-of-red-velvet-cake-a90997

Any cake wold look GREAT on this vintage cake plate from mymilkglassshop.etsy.com: 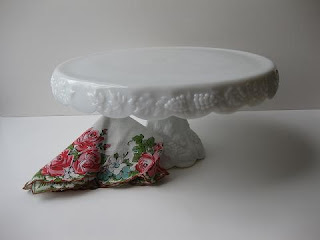 Need to transport your cake? Cool carrier from keeky27.etsy.com: 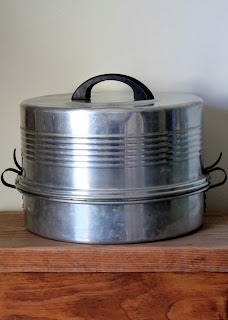 Posted by nora - treasurehuntvintage at 6:24 PM

What a wonderful post... I've actually tried my hand at making RV cupcakes and didn't do too bad :)

I'm sorry, though, I can't visit your shop too often - you just have too mnay wonderful things in there and I couldn't control myself :) And yes... you've so tempted my w/the cake stand!

That looks utterly delicious! Red Velvet Cake for breakfast anyone?

EVT Around the Web 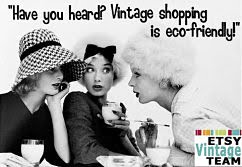